Up to Microsoft Excel 2003, there was a in-built Custom Chart Type called the 2-Axis Chart. This was a pretty useful chart type, which I used to display very small numbers and very large numbers – all on the same chart. But it magically disappeared from Excel 2007, Excel 2010 & even Excel 2013.

The default Bar Chart of Excel has One X Axis (The Horizontal side), and One Y Axis (represented Vertically). This is useful most of the time.

However, once in a while, when you want to display 2 different sets of numbers in the same chart, and one set of numbers (Quantity) comprises of very small numbers, and the other set of numbers (Sales figures) are very large –  in Thousands.

If you plot a normal bar chart, the Sales figures are so high that the bars are quite long, and the scale is set in Thousands. So  the Quantity figures are too small to be even seen in the Bar Chart.

A 2 axis chart is slightly different from a normal, standard chart. It uses 2 Y Axis in the same chart. The one on the Left of the chart is used to display one scale (Small Numbers), and another Y Axis is added on the Right Side, which represents the (Large Numbers) in Thousands.

In this way, both small numbers and very large numbers are seen in the same chart – using both the Primary Axis and the Secondary Axis.

However, do note that the Bars of the Chart will overlap each other, and it will be difficult to see one set of values. To overcome this situation, we convert one of the bars into a Line Chart. Since the scale is different, both can be seen, and in this way, a useful 2 Axis chart is created easily in Microsoft Excel.

Want to Improve Your Excel Skills?

To Get Most out of Excel, Learn the  Pivot Table techniques in our
Pivot Table Masterclass Training!

You can have a beautiful looking chart, displaying data on 2 axis – the Y axis is listed on both sides. And it hardly takes a minute to build… Enjoy!

Hope you enjoyed this Excel Tip. If you would like some more tips on Charts, Pivot Tables techniques, simply Subscribe to the ExcelChamp Weekly Excel Tips Newsletter.

Are you facing any problem in using Excel? Any Question?

You have come to the right place. Tell us your needs. We’ll be glad to help you! 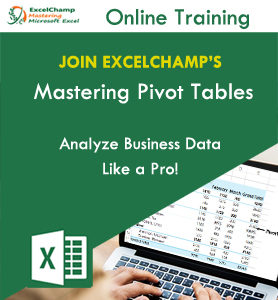 Get Excel Tips & Trick Each Week

Having Problems with Excel?

Tell us the issue you face in using Excel, and we’ll try to help you out! 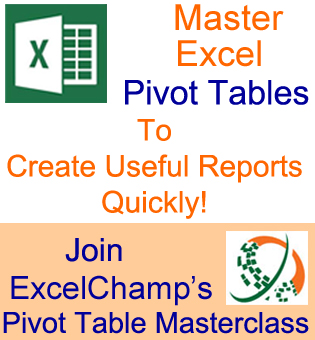 Learn Simple Tricks To Be an Excel Expert!